As a primary care practice, we are the first point of contact for your health. Whether acute symptoms, chronic illnesses, sick notes or preventive health care. If necessary, we refer you to specialists we trust. Sick notes, wound care or surgery preparation and follow-up - we take care of you from start to finish.

As general practitioners, we are here for you during this difficult time. We test, vaccinate and look after your long-term health in relation to Corona.

Important: Please let us know on the phone or when booking online if you are showing symptoms. In this case, we do not ask you to come directly to the practice - we will contact you after booking the appointment with further information.

COVID antibody test for the determination of immunity

As general practitioners, we see ourselves as long-term companions in dealing with chronic diseases. In combination with disease management programs (DMP), we will find the best therapy and solution approach for you.

Prevention is the best medicine. We support you in avoiding the occurrence of future illnesses or in detecting and treating them as early as possible. This way you can assess where you stand in terms of health.

Whether you need a specific vaccination, a check of your vaccination status or travel medicine advice for your upcoming holiday - make your appointment online now.

Vaccinations from the age of 60

Occupational vaccinations and for risk groups

Indication vaccinations in immunodeficiency or immunosuppression

Certificate of incapacity for work (AU) and medical certificate

You don't always have to be sick to see your doctor - quite the opposite! In addition to treating acute symptoms, we offer a wide range of additional services to ensure that you feel healthy and well in the long term.

Not all complaints are directly attributable to an underlying disease. We follow a holistic medical approach and take care that we find the best solution for your health complaints together.

How Avi Medical helps you

Asthma itself is not curable in most cases, but with advanced forms of treatment it is possible to limit the disease significantly. With the right treatment, almost 100% of performance is possible. In your consultation with one of our Avi Medical doctors, you will receive your individual advice and together we can quickly find a remedy with the right treatment, especially for asthma.
Throughout your asthma treatment, our doctors are your constant companions and always there for you.

Asthma is a chronic inflammatory disease of the lungs with recurrent attacks of breathlessness, coughing, wheezing or chest tightness. Sometimes it feels like the air is literally "staying away". The cause of asthma development is a combination of hereditary predisposition and environmental influences. We further distinguish between two forms of asthma: allergic and non-allergic asthma.
In asthma, the lower airways (bronchi) are in a state of constant inflammation and defence, which is additionally intensified by certain influences. The result is violent reactions to actually harmless stimuli, i.e. an asthma attack. This results in a spasmodic constriction of the bronchial tubes, the mucous membranes swell and in some cases produce excessive amounts of mucus.

What are possible symptoms?

What are the triggers of asthma?

In principle, there are many different causes that can lead to asthma. Generally, a distinction is made between allergic and non-allergic asthma , but mixed forms can also occur. Genetic inheritance of allergies and asthma plays a major role, but occupational or environmental triggers are also involved in the development of asthma. For each form, there are different triggers that need to be identified in detail. We will be happy to advise you on this so that you can specifically avoid these stimuli.

Asthma is a combination of two components: the permanent inflammation of the bronchial tubes and an external influence that triggers the inflammation.

Allergic asthma is triggered by allergenic substances in the environment (e.g. pollen and animal hair). Genetic heredity (60-80% heritability) plays a major role, especially in allergies such as hay fever or to house dust. It often occurs from the second year of life onwards in combination with dermatitis, enteritis or rhinitis. Children are therefore more frequently affected by allergic asthma than adults.
The most common triggers are inhalant allergens, i.e. those that are inhaled with the air and thus reach the mucous membranes. If such an allergy is left untreated, it can lead to a so-called stage change, in which, for example, simple hay fever becomes allergic asthma.

Non-allergic asthma usually begins in adulthood and is triggered by non-specific stimuli. Possible triggers are viral or bacterial infections (infection-associated asthma) or various irritants such as smoke, air pollutants or cold air. Heavy laughter or psychological stress can also lead to asthma attacks.

Especially in recent decades, the number of people affected has risen sharply. One of the reasons for this is increasing hygiene. Since most diseases and pathogens are kept under control, the immune system is underchallenged. This leads to substances that are actually harmless being overestimated and then fought by the immune system. This leads to an allergic reaction which can also turn into asthma.
Together with your Avi Medical doctor, we can specifically determine the cause and thus the appropriate therapy for you.

Treatment of asthma at Avi Medical

Asthma itself is not curable in most cases, but with advanced forms of treatment it is possible to limit the disease significantly. With the right treatment, almost 100% functional capacity is possible.
The treatment of asthma is divided into non-drug and drug therapy and can complement each other well.

The goal of non-drug therapy is to control the disease and achieve freedom from symptoms through good patient education. People learn how to avoid allergens or other triggers through irritant shielding and what else can help prevent asthma attacks. Also part of the non-drug treatment are respiratory therapy, physiotherapy and, above all, regular endurance sports, which help to sensitise asthma. One form of treatment for allergic asthma is hyposensitisation, where the patient is given allergens at regular intervals over a period of time, with the aim of getting the body used to the allergens and no longer triggering an immune response.

Various inhaled forms (inhaler) are available for the treatment of asthma in drug therapy , whereby the active substances reach the site of action, the lower respiratory tract, more specifically and in higher concentration. Depending on the severity of the disease, there are basic and demand therapies, also called relievers and controllers.
Reliever is a spray that is only used for seizure-like symptoms. It is therefore mainly used as an emergency therapy for acute use and rapid relief of symptoms. Relievers are often administered via inhalers or sprays so that the active ingredient can act directly on the affected area - the lungs. This quickly relaxes the bronchial muscles and dilates the constricted bronchial tubes.
Controllers are used for permanent therapy for prophylaxis. Inhaled anti-inflammatory corticosteroids (cortisone) reduce the chronic inflammation of the airways in asthma or dilate the bronchi for several hours. For controllers to work properly, it is very important to take the medication regularly.

The goal of your asthma therapy at Avi Medical is:

Our goal is to make you the "manager" of your own disease, so that you can continue to enjoy your work, everyday life and leisure time!
Arrange your asthma consultation in one of our Avi Medical GP practices or by video and together we will find your therapy. 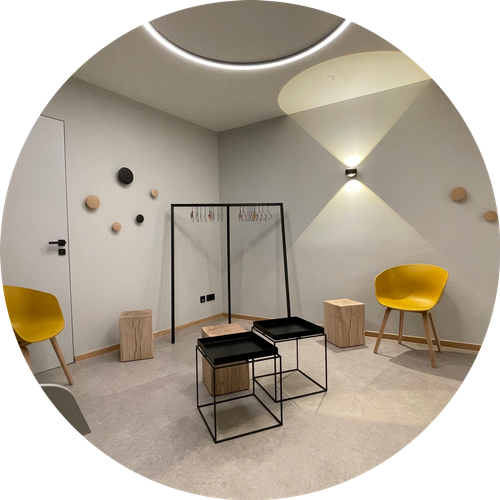